Thanks to the U.S. Embassy in Serbia, I had the privilege of meeting a number of groups in Novi Sad, Belgrade, and Niš last week, to discuss American politics and, separately, online learning.  The first in a series of observations appears at Foreign Policy Association’s ForeignPolicyBlogs.

“The former ministry of defense buildings still show the considerable damage from U.S.-led NATO bombing in 1999.  Unlike several of its Balkan neighbors, Serbia remains outside of the EU.  Unemployment remains high, especially among the young. And the government is under attack for a recent public relations stunt gone wrong, which ended with a helicopter crash that killed several soldiers, medical personnel, and an infant.

“Meanwhile, ordinary people go about their lives. On the Easter Monday holiday, Kalamegdan Park is filled with people enjoying the warm spring weather…  At night, lively crowds laugh and eat and drink as they stroll along Kneza Mihaila, with a big slice of Caribic’s €1 capricciosa pizza.

In an update to my 2012 survey, at the University of Novi Sad last week I offered the results of an informal follow-up.  In short, university students are studying – reading and writing – on their tablets and phones than ever before.  And in addition to a greater number of students doing their written work on their phones and tablets, they are doing so more frequently.

More on this in upcoming posts. 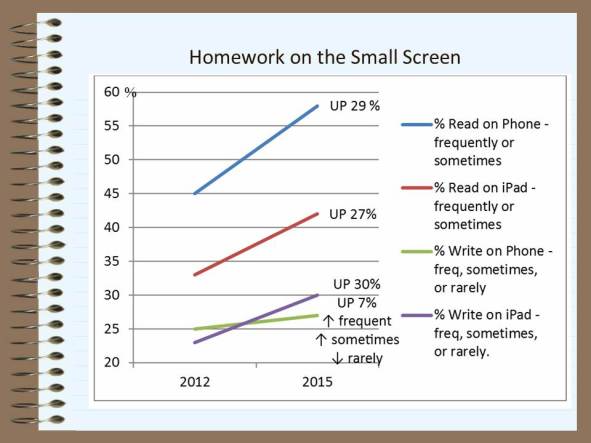 If you’re not learning the skills you need to while you’re
in college (problem-solving, communication, collaboration), then pay $3,000 for a three-week camp to learn them.

“It’s not that these skills are not learned in college, they are not taught,” said Josh Jarrett, a former official at the Gates Foundation, and a co-founder of Koru.

How long until people decide to just skip the first $200,000 and move right to the boot camp?

New York’s Cardinal Timothy Dolan and two Hollywood producers share a look at the crises in the Middle East with a challenging perspective:  we risk the end of Christianity in one of its earliest homes.

From their Good Friday op-ed on CNN:  With the rapid advance of ISIS through northern Iraq last summer,  “Iraq’s Nineveh Plain has been emptied of its ancient Christianity community, which existed there for more than 1,500 years.”

Catholic, Eastern,, Orthodox, and Evangelical Christians joined to echo the call from Cardinal Dolan, Northern Ireland’s Touched by an Angel actor Roma Downey, and  Mark Burnett (Survivor, The Apprentice, more).  Downey and Burnett have been active in humanitarian aid for all victims of the wars in Syria and northern Iraq.